Many mourners gathered in London despite the cancellation of vigils due to coronavirus restrictions.

Dick defended police officers, however, stating that there had been “six hours” of peaceful gathering but that as the crowd grew in size her team saw it as an “unlawful gathering, which poses a considerable risk to people’s health, according to the regulations.”

Protesters took to the streets of London on Sunday to denounce police actions and violence against women.

Despite calls for her to step down, the commissioner said she was not considering it.

“What happened to Sarah appalls me. As you know, I’m the first woman commissioner of the Met. Perhaps it appalls me in a way even more because of that. What has happened makes me more determined, not less, to lead my organisation,” Dick told reporters.

But the police force nonetheless came under heavy criticism with home secretary Priti Patel stating that footage from the vigil was “upsetting” and stating she had asked police for a “full report on what happened.”

London Mayor Sadiq Khan said the policing was “unacceptable” saying that he did not agree with the decision by a judge to cancel the vigil.

Khan said he had been assured the event would be policed “sensitively” but that in his view, “this was not the case.” He called for a full report into the event as well. 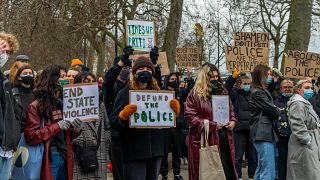